My memories of Onset Island in Onset, Ma cover about 50 years from about 1960 to 2010. I will only touch briefly on the history of OnsetIsland and OnsetVillage. I will cover those histories in a future document. I will, instead, attempt to introduce you to a unique world only known to a small subset of the population – Onset Islanders.

Onset Island is located in the area of Massachusetts called Cape Cod. The 12 acre island sits in OnsetBay, off the village of Onset. Fifty plus summer cottages are now located on the island. The island was first used by the local natives as a summer camp and a place to harvest shell fish. I will discuss the history on OnsetIsland in another document.

Whether you call it Pine Point, Old Pine, Onkowam, Pine Neck, or Onset, OnsetVillage is rich in history. Onset really started to flourish in 1848 when trains arrived from Boston to carry industrial goods to market, and thus introducing Bostonians to Onset. Cottages were built, hotels constructed; and as the tourist population grew, the tourists arrived daily by train, sailboat, and steamers. Onset was once a major terminus for the old side wheeler steamboat ferries. The route included New Bedford, Woods Hole, Martha”s Vineyard, and Nantucket. OnsetVillage was known as Pine Point, bought by the Spiritualists in the late 1800’s. It was not until they named their Association the Onset bay Grove Association that Pine Point begins to be thought of as Onset.

The Barber Family Cottage sits on the site of one of the three earliest houses on OnsetIsland, owned by Mr. Perkins from about 1900 to 1938. Ed and Ellie Fanning owned the site from 1938 to 1954. The house was lost in the 1938 hurricane. Mr. Fanning rebuilt and enjoyed many happy years. The cottage and a grandchild were lost in the 1954 hurricane. My dad, Mal Barber, purchased the site in 1956. He and his buddies built our cottage and the Barber Family has enjoyed many wonderful years since. I was born in 1953 and my first visit was in 1955 – we rented a cottage for a one-week vacation. I’m not sure that I recall much before the 1960’s. We would spend every summer weekend and 3 weeks in August on the island. We would head for the island around 3:00pm every Friday evening and stay until Sunday afternoon. I now know that in the 1960’s and 1970’s the trip took us 2-3 hours, while today it takes about 1 hr 15 minutes from Everett to Onset.\r\n\r\nDuring the 1950’s and 1960’s, my friends and I enjoyed the unique adventures on being on an island. We could play in the sand and water. We could hunt for shellfish – quahogs, clams, scallops, oysters, and mussels. One of the points was covered with mussels and nobody seemed to eat them. At high tide we would go to the beach and swim. At low tide, we would go to the lagoon and play in the shallows trying (but never catching) tiny fish and laughing all the while. I learned to use a motor boat, sail, swim, dive, water ski, and play hard & safe on the water. During the early 1970’s, I worked on the island with Tommy Richards. We raised cottages, put on additions, did general repairs, replaced windows, painted, and shingled. I stayed on the island in our cottage by myself during the week and my family joined me on the weekends. I continued to enjoy the water, sun, and sand. I would sometimes work an 8-hour day and water ski during my lunch-hour – wow. These are things that I remember about Onset Island. I promise to share more about this wonderful place. 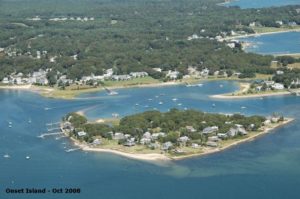